Maven’s strategy entails executing acquisitions in the most prolific resource plays in the continental U.S. The firm defines target areas based on oil and gas reserve potential with emphasis on operator quality and fiscal ability to develop acreage in the foreseeable future. 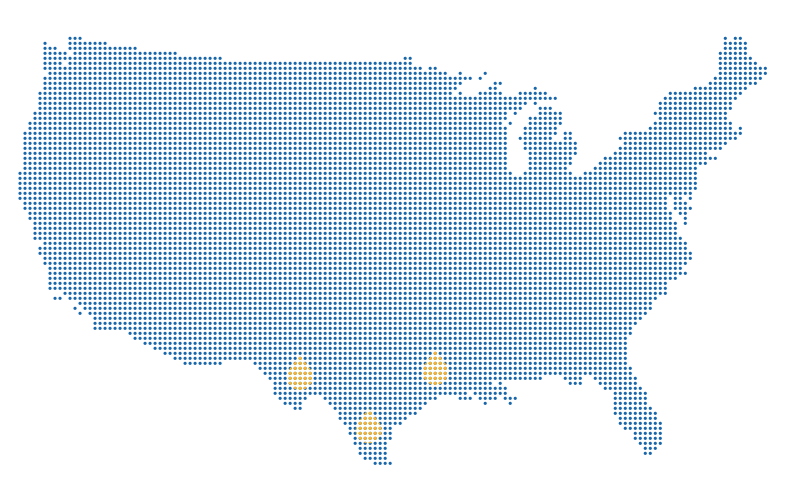 The Permian Basin of West Texas and Southeast New Mexico is one of the country's most prolific basins, having been commercially drilled since the early 1920s. Today, with over 150,000 active wells in 52 counties, the Permian continues to be aggressively developed with many operators now focused on horizontal drilling and pad development. Due to the presence of multiple target reservoirs or “stacked pay”, both Midland and Delaware Basins (Permian sub-basins) contain unparalleled reserve potential.

MRP is interested in both producing and non-producing acquisitions in Culberson, Eddy, Lea, Loving, Ward, and Reeves County in the Delaware Basin and Midland, Glasscock, Upton, Howard, Martin, and Reagan counties in the Midland Basin.

The Eagle Ford Shale of South Texas, discovered in 2008, has been one of the most actively drilled targets in the US for over a decade. In recent years operators have optimized well spacing and implemented longer cross-unit laterals which has resulted in improved well performance and reserve recoveries. MRP considers core Eagle Ford mineral opportunities an integral piece to the investment strategy.

MRP is actively pursuing deals throughout the Eagle Ford with its biggest focus on Karnes, DeWitt, and Gonzales counties.

The Haynesville Shale of Northwestern Louisiana and Eastern Texas is a natural gas bearing shale that is second only to the Marcellus in estimated recoverable gas. The Haynesville has a substantial geographic advantage due to its proximity to the Gulf Coast where the majority of U.S. liquefied natural gas exports continue to grow. Beyond market accessibility, factors such as robust reserve inventory, production output capacity, and high economic returns define Haynesville as the premier gas shale play.